Day after day in Britain, we are hearing more and more chilling claims regarding child molesters in positions of power: this report, entitled "MP paedophiles 'were Untouchables' - ex-Special Branch officer", being sadly typical. I think I speak for all decent people when I say that I sincerely hope that the Westminster paedophile ring - and at this point I have little doubt that such a thing existed once, if not today - will be busted and its members put to justice.

While emotions are running high, it goes without saying that there will be crass opportunists trying to exploit public opinion in exercises of cheap point-scoring. And so we come to Labour25.com, an anonymously-run website which claims that the Labour party is so riddled with paedophiles that every single member of the party should be investigated by the police (the Conservatives and Liberal Democrats apparently being above this suspicion).

The website takes its name from the fact that it initially identified 25 convicted paedophiles with Labour histories, although it has since found 23 more, bringing the total up to 48. But how significant is this statistic?

Well, according to the NSPCC, there were 29,837 paedophiles across England and Wales on the sex offenders' register in 2012. This is just under 0.053% of the two countries' combined population. The Labour party currently has 190,000 members; 48 is just under 0.026% of 190,000. So, proportionally speaking, the number of paedophiles identified by Labour25 is not remarkable.

Now, the people behind the site would have a point if they were able to demonstrate that the Labour Party was still harbouring these nonces even after their crimes came to light, but Labour25 provides no evidence of the sort. In fact, the site routinely presents former Labour councillors as still being active within the party.

Typical of the website's approach is this post about Nelson Bland, who was convicted on child pornography charges in 2004. When the Reading Post reported on the incident, it identified him as a former councillor. Labour25, on the other hand, refers to him as "Labour Party Paedophile Councillor and IT School Teacher" - clearly implying that he is still a councillor. Labour25 then goes on to state that...


"Labour party paedophiles are attracted to jobs in Schools or social care for children. this is why once again this website stresses…NO LABOUR COUNCILLORS or MP’s or Activist members should be allowed to work near children."

I'd imagine that many paedophiles seek jobs which put them in contact with children, regardless of political allegiance. The website is trying to paint this as specifically an issue within the Labour party, raising the question of who its real target is: paedophiles, or Labour?

So while the site obviously wants us to believe that these paedophiles are all still working with Labour, a look at the facts gives us no reason to assume this. Note, also, that none of the Labour25 posts linked to above provide any sources for their claims - it's almost as though the website doesn't us to do our own research...

In at least one post, Labour25 actually clarifies that the paedophile in question (Colin Inglis) was ejected from the party after being caught:


"Labour Leader of Hull City Council Colin Inglis Loses his Labour position after it is brought to light that he masturbated on a 13 year old boys bed and took a naked shower with him and ‘washed him down.’

Why are Labour Councillors allowed to work as social workers when it is now obvious that the Labour Party is a Paedophile Party?"

So, remind me, why am I supposed to be angry at Labour in this instance? I have no reason to believe that the party was aware of Inglis' child abuse, and it ditched him when his paedophilia came to light. But yet, Labour25 is trying to pass this incident off as evidence that Labour is pro-paedophile.

It is hard to deny that, at the end of the day, Labour25 exists not to expose child molesters in our midst but to smear Labour. There are paedophiles with Conservative connections who are just as worthy of condemnation as the Labour nonces named and shamed on the site: think of Mike Oram, Michael Powell, David Smith, Julian Mineur, David Whittaker, Martin Fisher, Kenneth Leadbeater, Ian McKellar and Peter Stidworthy to start with, not to mention Margaret Thatcher's personal friend Jimmy Savile. The Lib Dems, meanwhile, have given us Bill Chadwick and Derek Osbourne, while its ancestor the Liberal Party played host to the notorious Cyril Smith. UKIP was once home to Peter Entwhistle, a former Bury chairman, and the party's failure to distance itself from another convicted paedophile caused member David Gale to resign.

But Labour25, illogically, has chosen to focus on paedophiles with connections to only one of the main parties. It has called for police raids on every single Labour member in the country (all 190,000 of them!) but seems happy to let the other parties off the hook.

Labour25 is also silent on Ian Si'Ree, Roderick Rowley and Gavin Leist - all paedophiles with history of involvement in the BNP. But then, I suppose that goes without saying when we consider that the site is endorsed by the BNP:


"British National Party superactivist Peter Tierney has been arrested for handing out Labour 25 leaflets, which detail the names of 25 convicted Labour party paedophiles.

Mr Tierney was arrested in Liverpool and taken to Belle Vale police station after distributing the leaflets, which name and shame 25 Labour party councillors, mayors and activists who were convicted for crimes such as possession of child pornography and child rape."

The BNP connection brings us to Labour25's secondary motivation. As well as smearing Labour, it also exists to smear minorities. Its 'about' page makes a clear connection between paedophilia and homosexuality:


"It is said that ignorance is bliss and perhaps Labour lives this ‘bliss’ for a reason. It was the Labour Government that introduced explicit sex education for 5 year olds. Acceptances of homosexuality material also aim at primary school children. Are these grooming tactics brought into the curriculum by the Labour party."

Another post complains that "in the children's section of library's [sic] you are likely to find books about Homosexual penguins".

It is not just homosexuals who are targets of this sniping. The site's post on Lord Greville Janner is headlined "Child abuse detectives raid Jewish Labour party peer’s office in the House of Lords". Another post, making an unconvincing attempt to smear James Purnell using the child pornography habits of Paul Diggett, identifies its target as "the chairman of Labour friends of Israel & Freemason James Purnell".

And then we have this:

First off, the "lesbian paedophile teacher" is actually teaching an adult sex class in Canada. Enough said about Labour25's standards when it comes to research.

As for the cartoon on the left, well, just look at it: 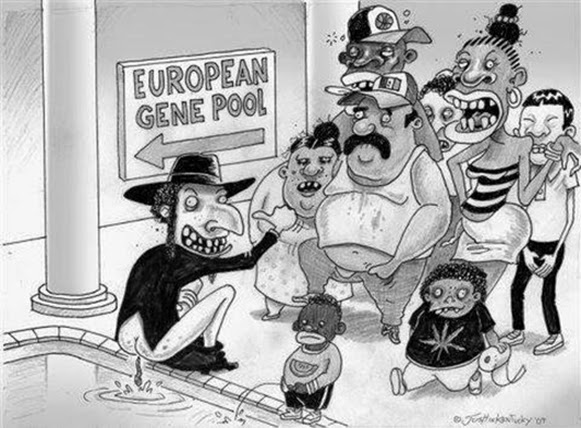 Really, what more evidence do we need that Labour25 is run by racists?

I realise that I am leaving myself wide open to criticism with this post. Labour25 is a website which condemns paedophiles; in the black-and-white mindset of the far right, by opposing such a site, I must be defending paedophiles. Doubtless I will also be accused of being a Labour shill, despite never having voted for the party in my life

So, let me clarify a few things. There is nothing wrong with condemning paedophiles, nor is there anything inherently wrong with criticising Labour. My objection here is that the bigots behind Labour25 are exploiting sex crimes against children purely to further their petty partisan agenda. If they really gave a damn about paedophiles in positions of power, they'd be attacking the nonces with histories in other parties as well.

If you are a supporter of Labour25 and expect the site to be taken seriously, then perhaps you can answer a few questions...

1: If the Labour party is so riddled with paedophiles, then why does the site focus on former Labour councillors?
2: Why does it ignore nonces with previous connections to other parties, including the Tories, Lib Dems, UKIP and BNP?
3: Why is it obsessed with Jews, homosexuals and Freemasons, to the extent of smearing an innocent woman as a "lesbian paedophile teacher"?
Posted by Unknown at 04:01

Kooks 'n' bigots across the UK